Typically, when people think of Napa, they think of the picturesque landscape — sprawling estates with rolling hills, orderly vines of every varietal, the morning sun burning off the gray mist that blankets the valley.

There is much to love about that heavenly slice of Wine Country. But recently, I stopped through downtown Napa to visit JaM Cellars, which offers an unexpected taste of Napa Valley. Centrally located on First Street, next door to Andaz Napa and sister brand John Anthony Vineyards, it’s also a stone’s throw away from local restaurants such as Eiko’s Sushi, Grace’s Table, and Charlie Palmer Steak in the ultra-chic Archer Hotel. 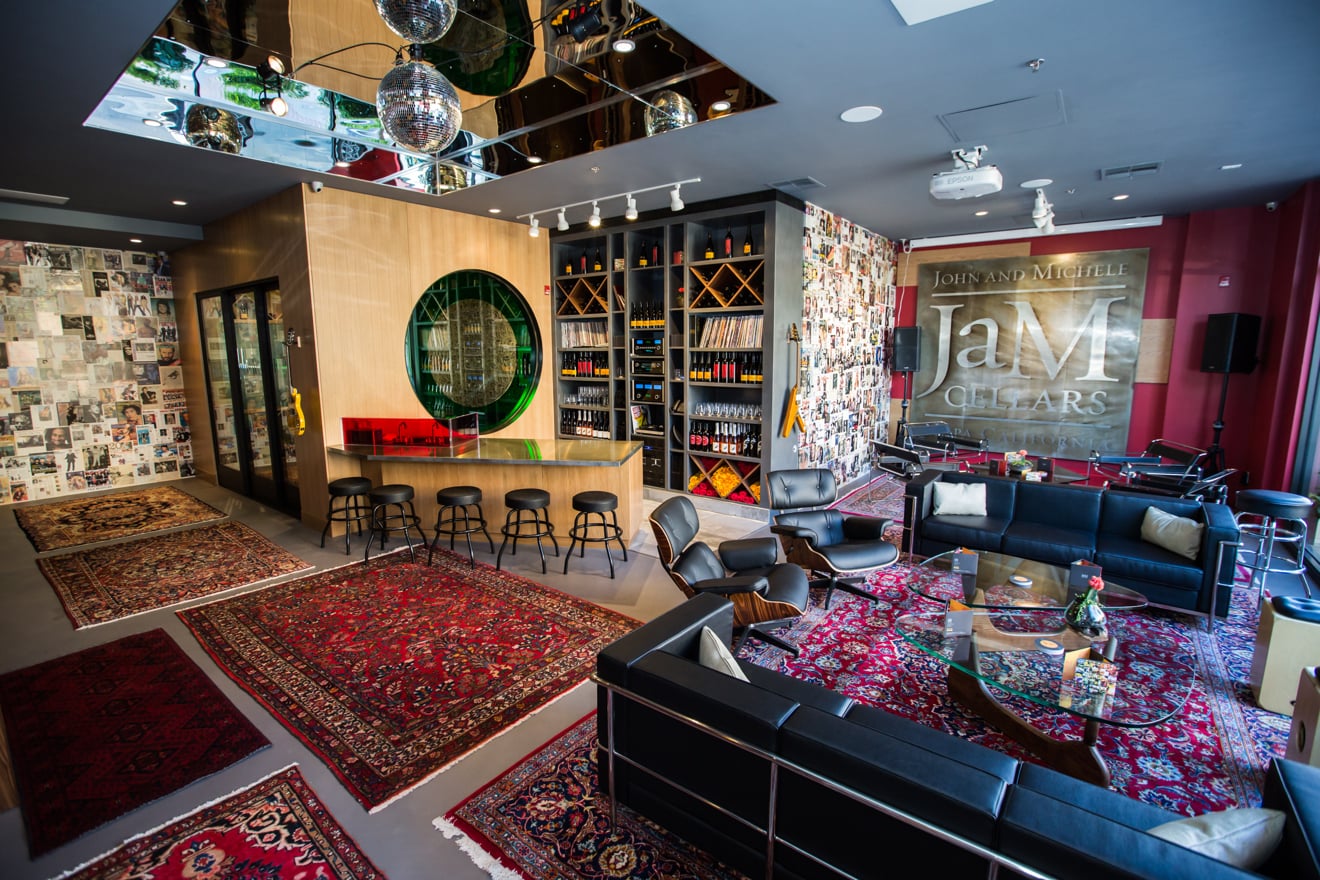 Upon stepping through JaM Cellars’ doors, it was immediately apparent that this was not like any other Wine Country tasting room that I’d been to. Like all Napa and Sonoma tasting rooms, JaM was well proportioned and thoughtfully decorated. Unexpectedly though, this tasting room had walls that were papered with old Rolling Stones covers, a live band setup, an incredible vinyl collection, Eames lounge chairs, and an honest-to-goodness recording studio in the back.

It may sound gimmicky at first blush, like a Hard Rock Cafe of Wine Country, but it wasn’t — the people I met there were as excited about music and community as they were about wine. The result of the décor and the easy personalities I encountered at JaM Cellars all contributed to the relaxed, intimate, and (perhaps most importantly) non-intimidating vibe in which to try wine — an unexpected experience in Napa Valley. 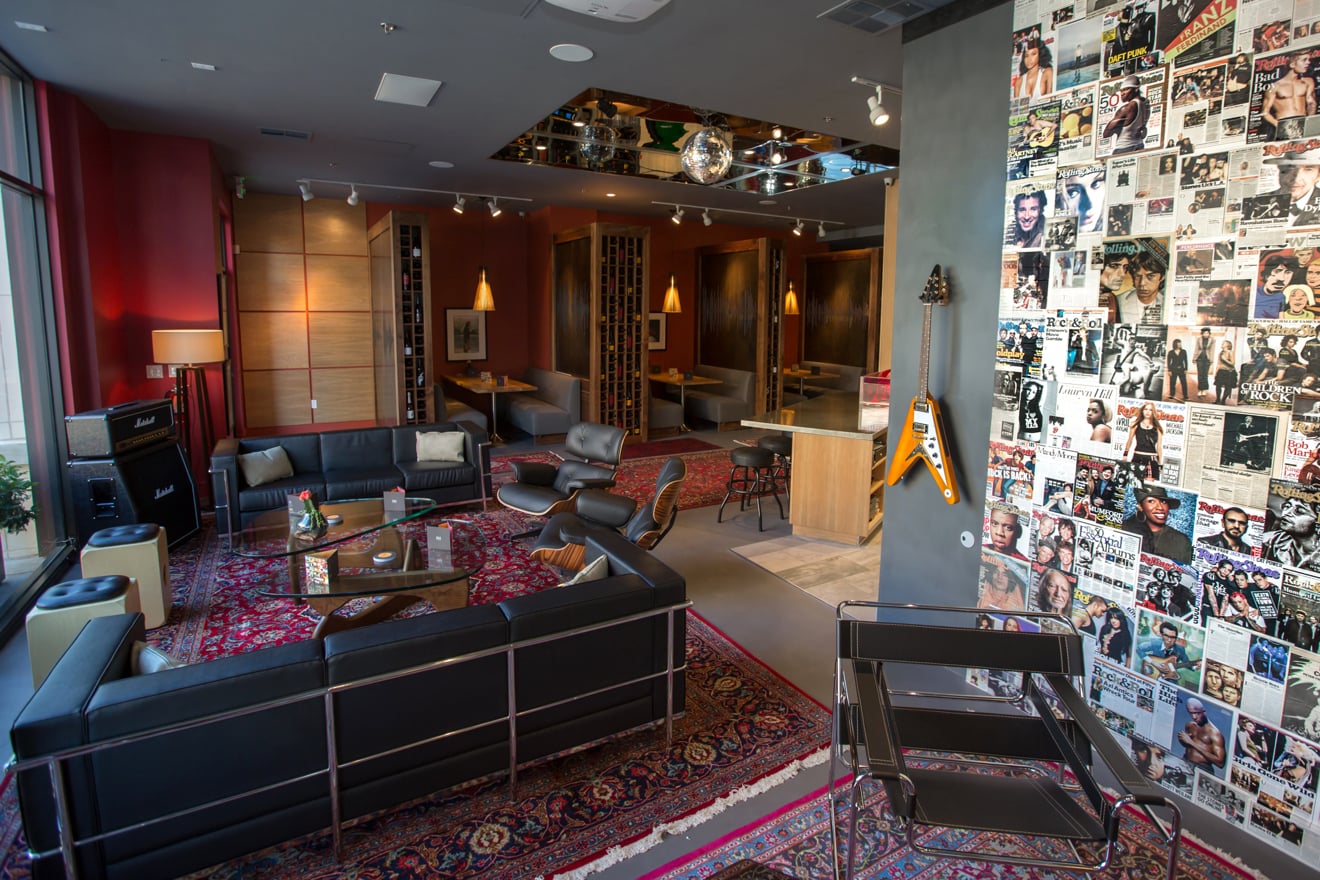 Anyone who’s been wine tasting knows, the conversations that happen are often about flavor profiles, vineyards, barrels, and the aging process. While there’s something to be said for understanding what you’re drinking, sometimes I just want to hang out and drink great wine, and get to know the people pouring on a human level in addition to learning about the wine. With JaM, the focus is on creating a refreshing environment where people can enjoy their wines while surrounded by their friends, whether that is in a lounge-like setting with an acoustic rock show going on, or during a progressive pop synth show with dancing under the sparkling disco ball.

Owen Ridings, the wine and music studio manager at JaM Cellars, was on site to greet me when I arrived early on Sunday. Dressed in jeans, a dark cardigan, Chuck Taylors, and black-framed specs, he seemed less like a traditional Napa Valley wine manager and more like an indie bookshop owner or the singer-slash-guitarist of a band (the latter of which turned out to actually be true).

But still, he did know a lot about wine. We reclined on couches around a glass coffee table, with a perfect view out the airy front windows of downtown Napa. Ridings took out their hugely-popular Butter Chardonnay and did a side-by-side pour of two appellations — one chardonnay made from a range of California growers’ grapes and the other from exclusively Napa Valley grapes, which is only available at their Wine and Music Studio. 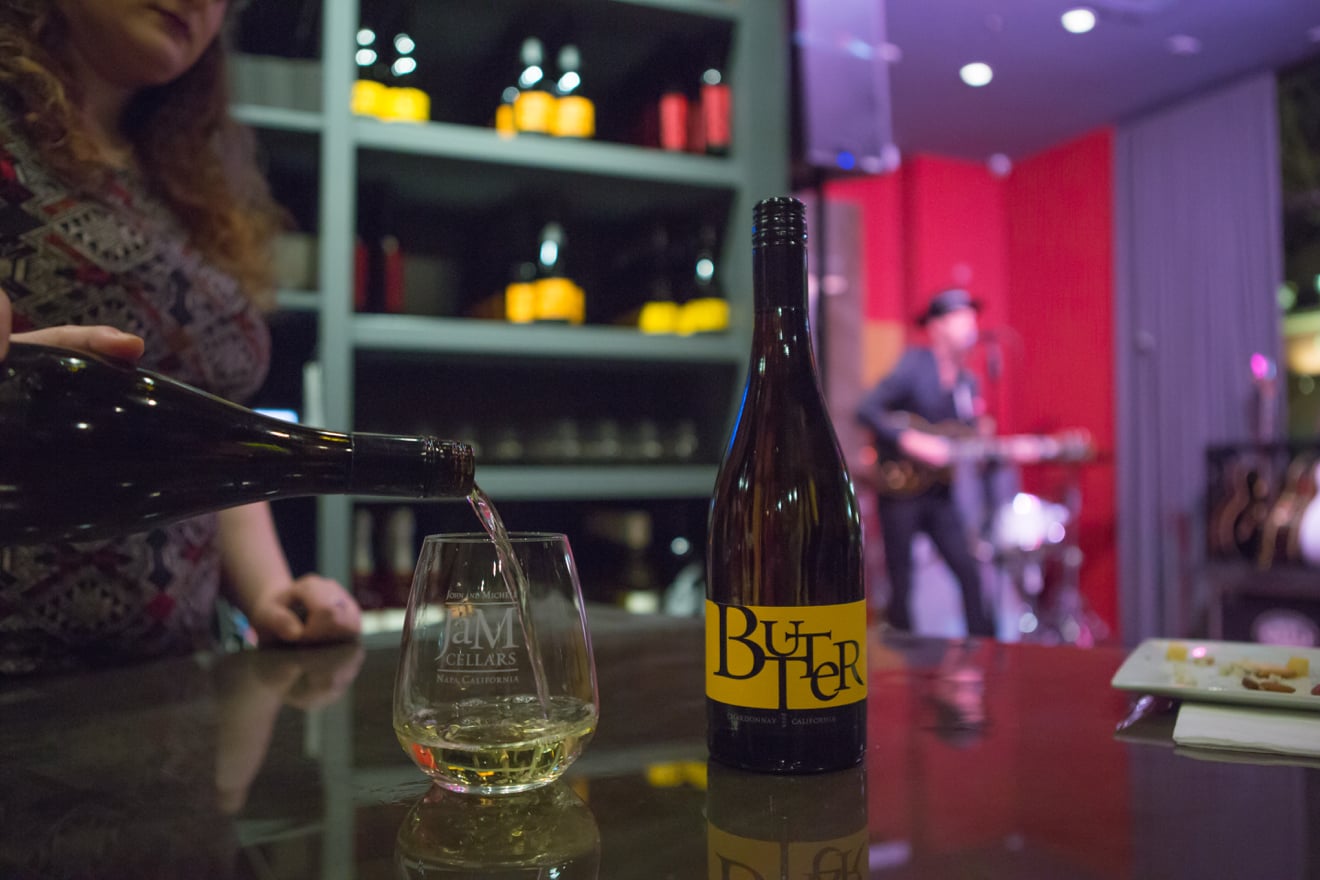 In between our conversations about their record collection, podcasts, and the accessibility of wine, I learned to taste the difference. The education was dispensed in such a way that I remembered words like ‘rich’ and ‘creamy’ and was completely comfortable admitting — in an environment so laid-back — that I couldn’t detect the hints of baked lemon or vanilla.

As we tasted and chatted, Ridings went on to share more about the story behind the wine. I learned that wines produced exclusively from Napa Valley vineyards vary from year to year. Napa Valley exists in a unique microclimate, and fluctuations in that microclimate affect that season’s crops. And since wine designated from a certain Napa Valley appellation means that wine is exclusively grown, harvested, aged, and bottled in Napa Valley, the sum of all those microclimate changes are compounded in that end product — the bottle of wine. The result can sometimes be devastating when Napa Valley suffers unseasonable weather or a natural disaster, but when things go well, as they do more often than not, wines produced in Napa Valley can be more vibrant and aromatic than those from elsewhere in California.

Not all vintners can source from some of the best growers in Napa Valley, but the team behind JaM Cellars has a long history here in Wine Country. The owners, husband-and-wife team John and Michele Truchard (the ‘J’ and ‘M’ of JaM Cellars), are second-generation Napa Valley vintners. With the success of their high-end John Anthony Vineyards already under their belt, John wanted to create great wine for the everyday drinker. I was surprised to learn that the JaM label was created during the recession in the aughts, but I shouldn’t have been — people always want quality, affordable wine. John relies on his long-standing relationships with growers to control the entire vertical process of winemaking, creating a quality wine at a reasonable price, then distributes through popular markets and grocery stores. (I’ve since found JaM’s handy WineFinder on their website, JaMCellars.com, that shows you everywhere you can find their wines around the country).

We moved onto the California Candy Dry Rosé. Named for its eye-candy appeal, this wine is as pretty as it is delicious — perfectly crisp and clean on a warm spring morning in Wine Country. Next, Ridings poured the Napa and California JaM Cabernets while I asked him about the studio itself. What’s it like to work in this space? A part shop, part live music venue where the owners have consciously moved away from what can sometimes be the sterile grandeur of tasting rooms of yore. 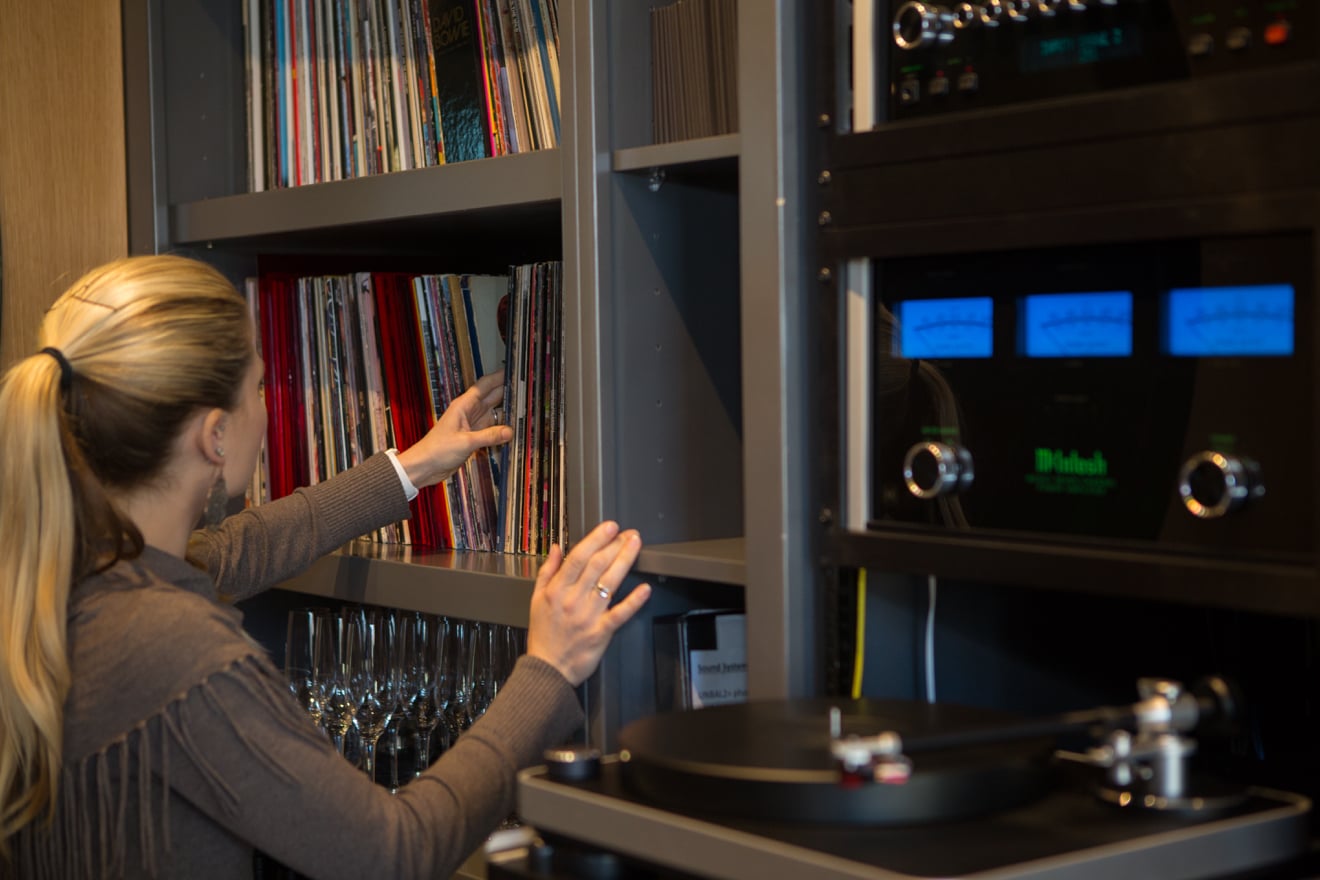 He details anecdotes of his favorite memories: guests who geek out over the vinyl collection, the reaction from the crowd when the giant disco ball is turned on, sourcing local talent for intimate shows during one of their JaMSessions, and bringing the community together with late night events (there’s not usually much open in Wine Country after dinnertime, but JaM Cellars is open until 10pm most nights and until midnight on Thursday, Friday, and Saturday evenings). 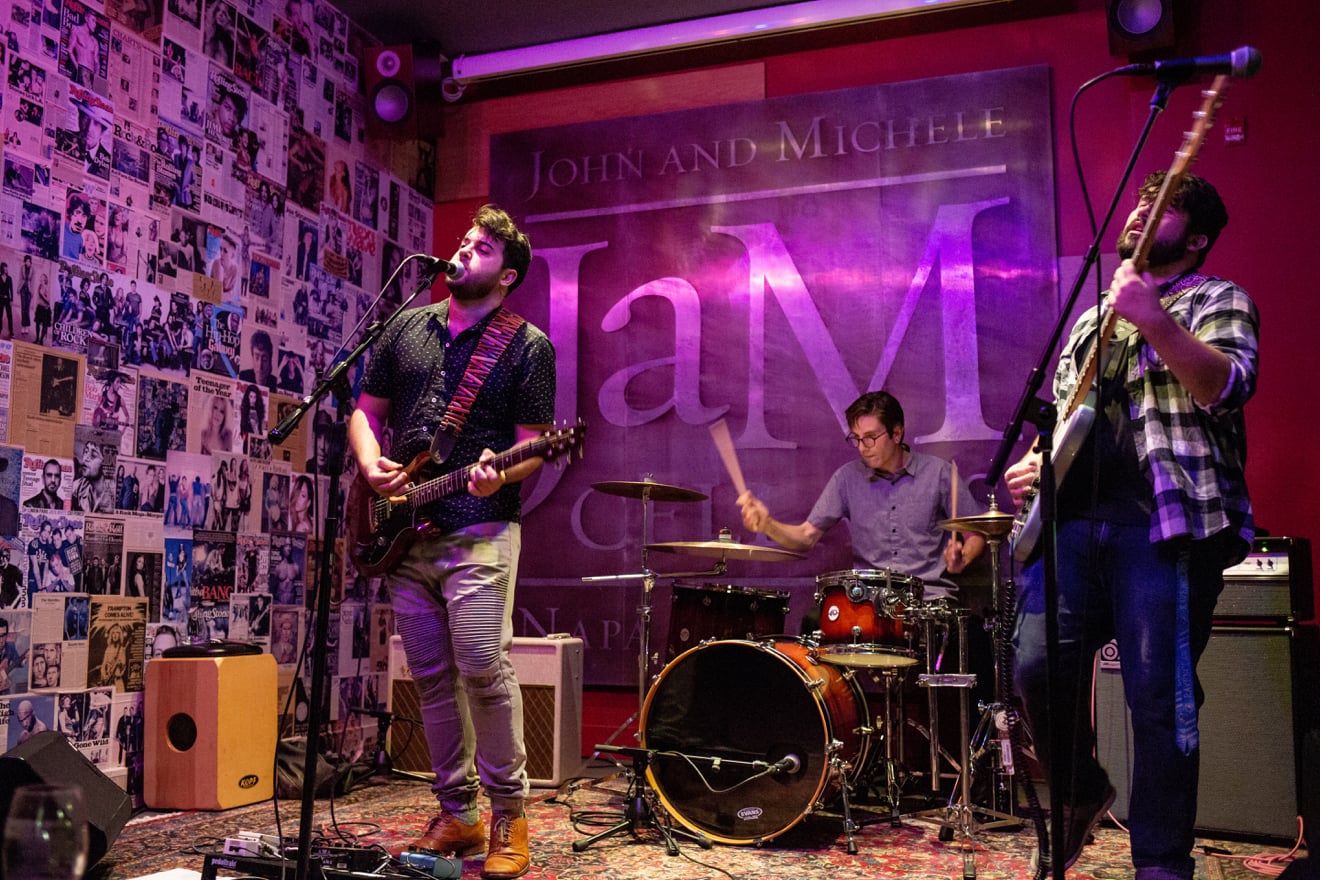 In short, his favorite moments are the ones that are about the people and their stories; that everyone happens to be enjoying great wine is the cherry on top. Those moments come in the tastings at JaM Cellars, but also on a larger scale at festivals such as BottleRock Napa Valley, among others. As the presenting sponsor of BottleRock, they host the JaMPad, which features intimate shows and DJ dance parties between sets. Their special California Candy Frosé was a hit last year in the toasty Napa Valley sunshine, so here’s to hoping they’ll bring that back. For a brand that has dispensed with the pretension and stuffiness, and embraced all the fun and bringing-togetherness aspects, a frozen rosé isn’t blasphemous — it’s irreverent, welcoming, and fun, just like tasting at JaM Cellars, and just like how creating a memory around delicious wine should be.

– Napa Guides: Where To Go, What To Do For Every Type of Traveler –

Julia Chang is a writer based out of San Francisco, California. In her early twenties, she made the transition from the eat-to-live to the live-to-eat type, and her waistline has suffered since. She works in tech by day and ekes out time to write about food and fiction on nights and weekends. She doesn’t sleep much. Follow her delirium on Instagram @onmywhimsy, and on Twitter @Jurichu.