Wine and music collide at JaM Cellars, a one-of-a-kind, music-themed tasting room in downtown Napa. While this part of town used to have a reputation for being a little bit sleepy, JaM Cellars is breathing new life into Napa’s nightlife with their JaMSessions, an ongoing series of intimate, wine-fueled concerts that keep the party going long after dinner.

JaM Cellars is the brainchild of music lovers John and Michele Truchard, the “J” and “M” in JaM. As second-generation Napa Valley vintners, the Truchards have had a long history in crafting fine wines, but with JaM Cellars, they wanted to do something different by introducing super-approachable and affordable every-day wines to the market. These wines are made to be enjoyed with friends in a not-so-serious setting, so John and Michele designed a fun and unconventional tasting space, the JaM Cellars Wine & Music Studio, located on downtown Napa’s First Street. 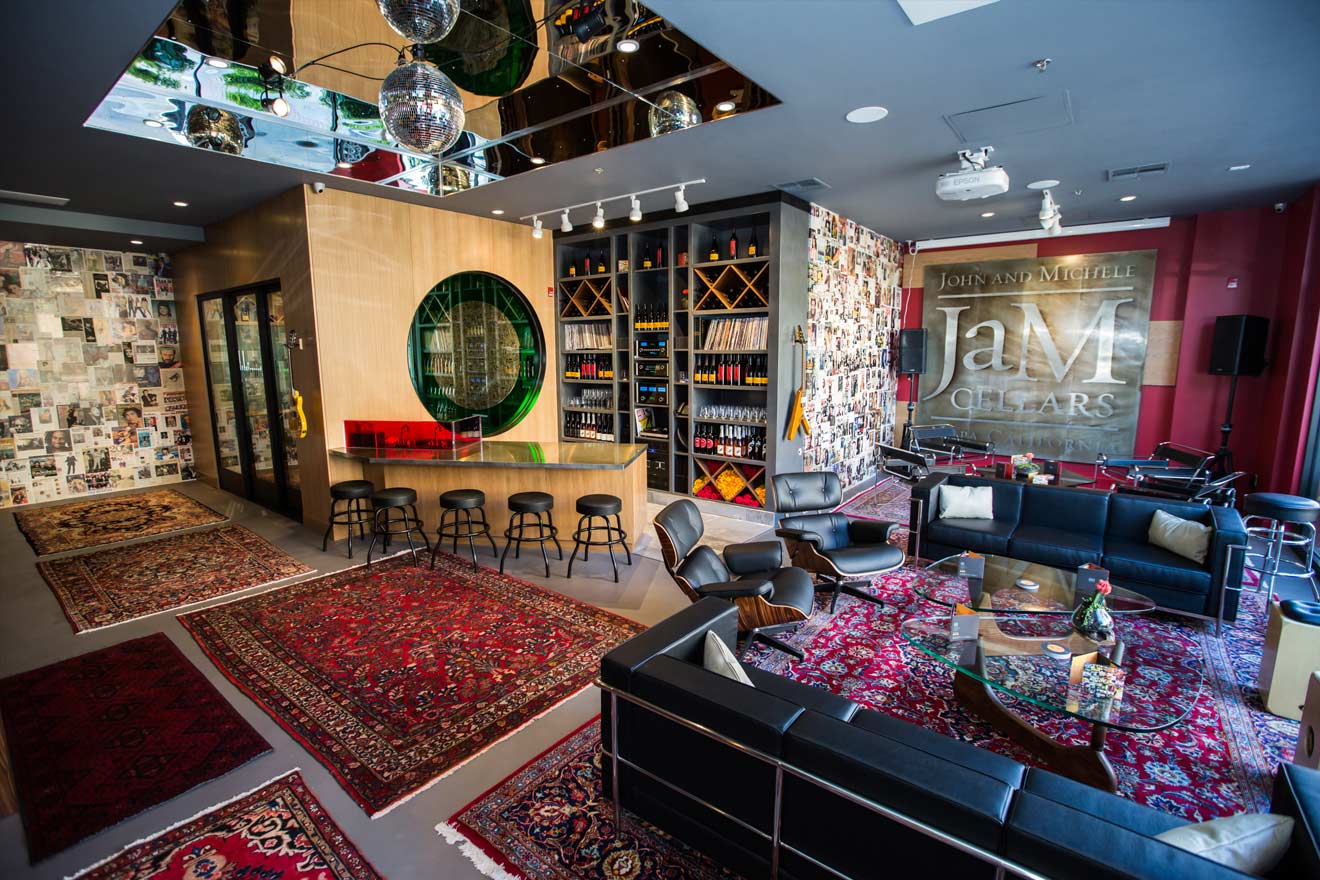 While JaM Cellars is a cool wine tasting spot during the day, it morphs into an incredibly cozy events venue with live music in the evenings, Thursday through Saturday. Napa Valley has a handful of larger concert venues, like the Uptown Theatre or the Napa Valley Opera House which houses both Blue Note Napa and the JaM Cellars Ballroom, but for the opportunity to comfortably lounge mere feet from the band, JaMSessions feel like a private show. You’ll want to reserve a spot and arrive early to snag the best view in the house, a collection of leather couches and chairs set up like a living room right by the stage, with Persian rugs and tables cleverly shaped like guitar picks. There’s also a handful of booths for groups and a few stools at the bar. Many guests simply choose to stand — it certainly makes dancing easier — but either way, there’s never the feeling of the space being overcrowded like a traditional concert. 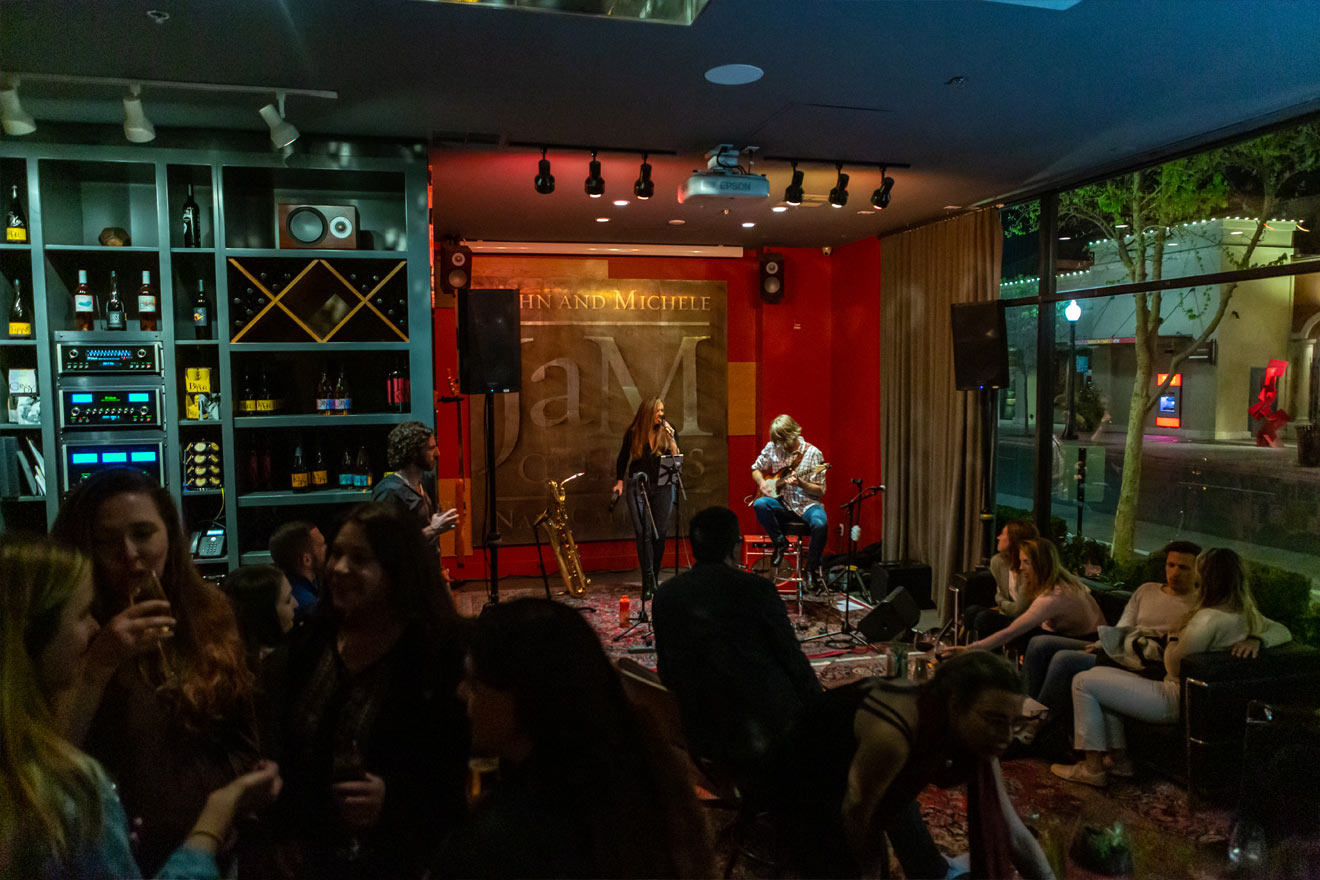 JaM Cellars stays open much later (10pm Sunday – Wednesday and midnight Thursday – Saturday) than its downtown Napa counterparts and music is on theme everywhere you look. A private tasting room doubles as a fully-equipped recording studio, where the winery hosts virtual JaMHappyHours Wednesdays and Thursdays at 4pm and there’s also a state-of-the-art sound system, disco ball, an impressive vinyl collection, and vintage Rolling Stone magazine art plastered all over the walls, bringing you back in time to some of your favorite musicians in their heyday. 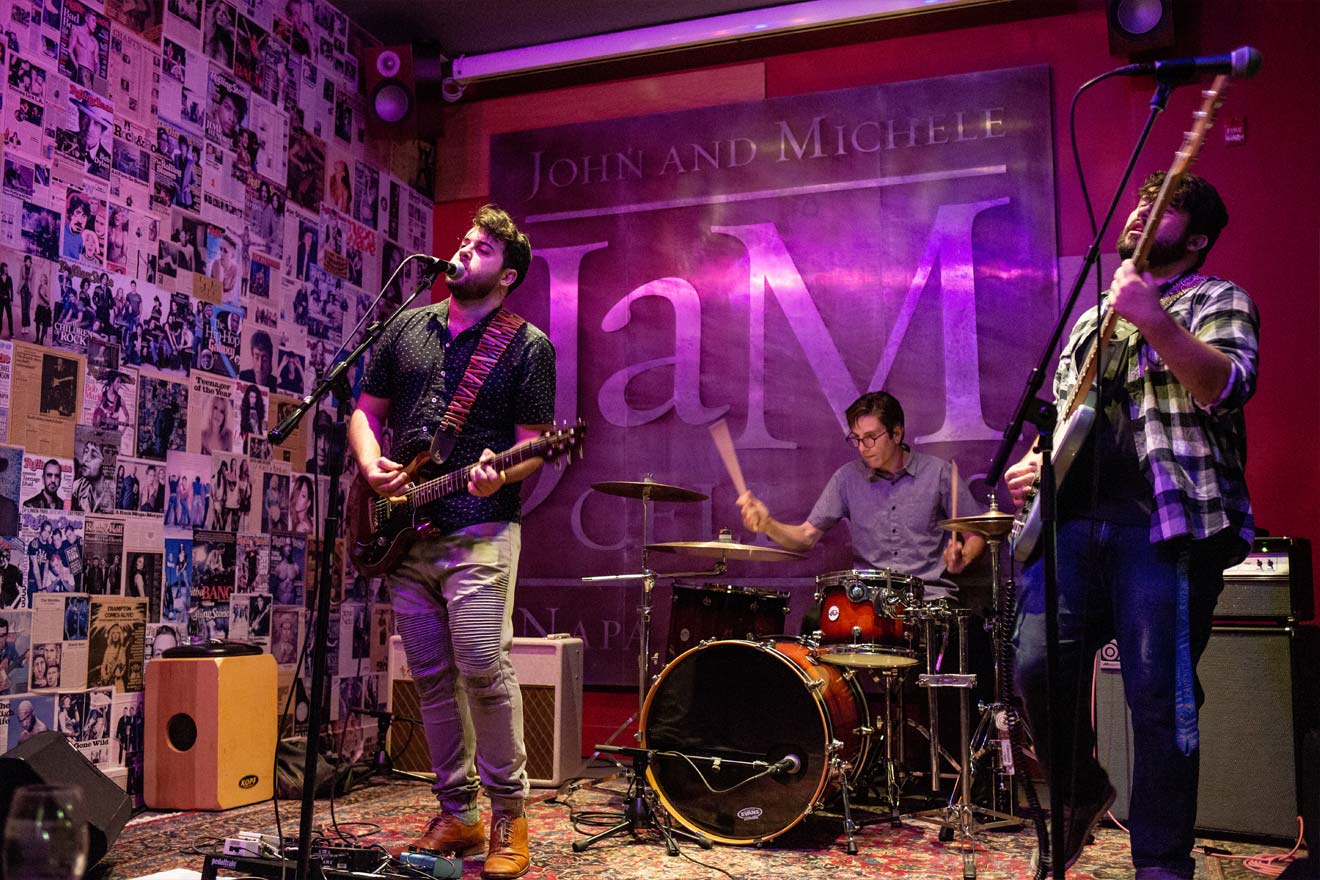 A mere $10 cover charge will get you in to enjoy their JaMSessions, which welcome a variety of acts both local and from further afield. The night I attended featured a JaM Cellars regular, the Eric Wiley Trio, a Funk/Reggae band with a Jazz flair. The songs were all covers of old classics — like the Steve Miller Band’s Space Cowboy, Get Up Stand Up by Bob Marley, and The Eagles’ Hotel California — and almost everyone in the room was either dancing or singing along (or both). At times, I could close my eyes and imagine myself on a tropical island, piña colada in hand.

These events take place on most Thursday, Friday, and Saturday nights, but check JaM Cellars Facebook page or website for listings. Live music on Thursdays is from 8pm-10pm while on Fridays and Saturdays the music runs from 9pm-11pm. With JaM Cellars’ connection to BottleRock Napa Valley (they are a five-time Presenting Sponsor) there’s a chance you’ll catch artists that also play the music festival (like Sam Johnson, Chris Pierce, and Mondo Cozmo). Other acts include nationally-acclaimed, touring artists (like Witherward), while others are based right in Napa Valley (including Full Chizel and JourneyDay). Book online via Tock to secure your spot. 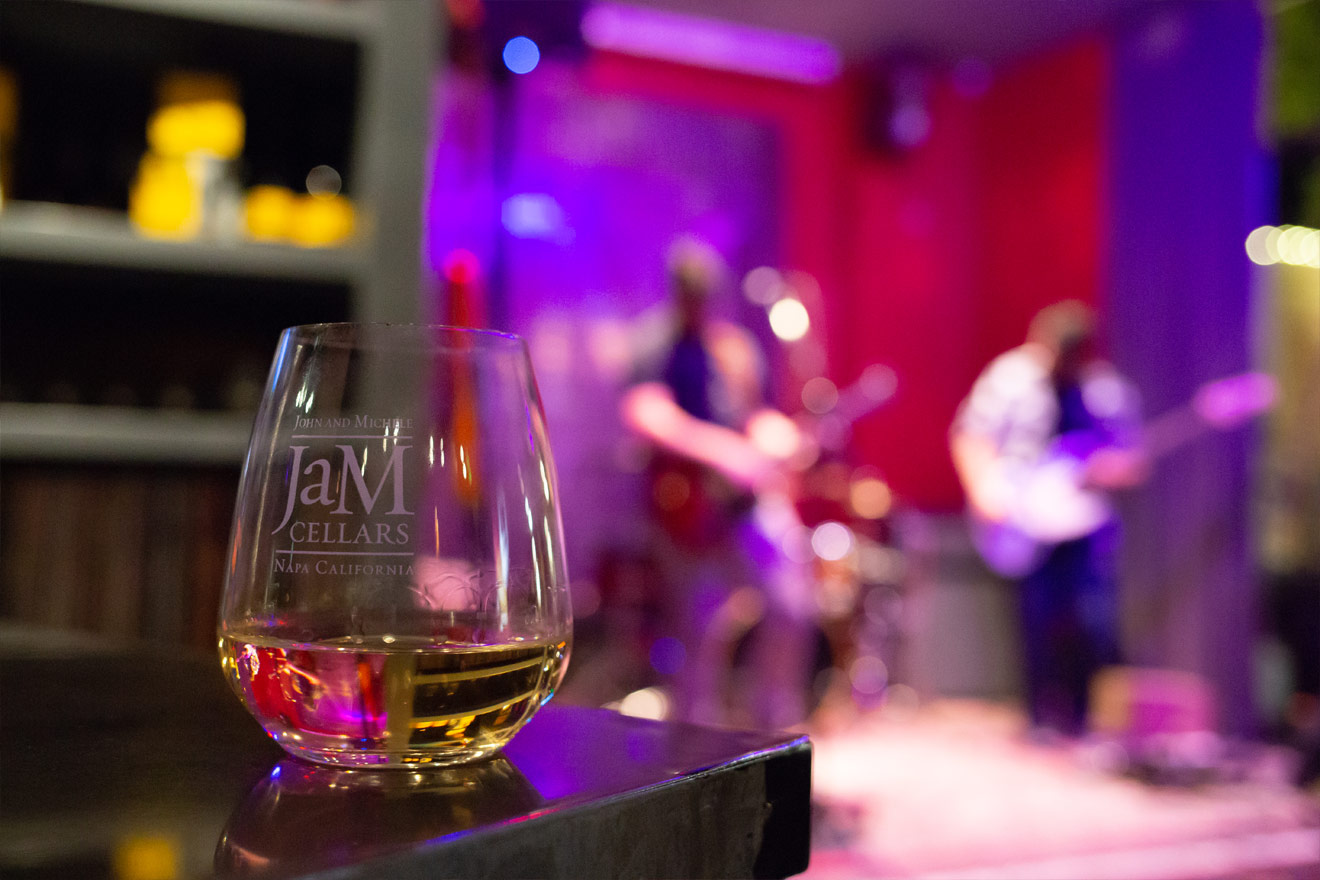 The wine is flowing all night long from the bar, available for purchase by the glass, flight, or bottle. You may know JaM Cellars for their popular Californian wines priced at under $20: the classic Butter Chardonnay, their signature JaM Cabernet, bubbles in the form of Toast Sparkling, and Sugar Sweet White, a Moscato. But don’t pass up the chance to try their Napa Valley releases exclusive to the JaM Cellars wine and music studio. Sip these side-by-side with their Californian counterparts for a fun taste test, or try the Napa Valley-only JaM Cellars Sauvignon Blanc and JaM Cellars Pinot Noir. There really is a wine here for everyone! Reservations are highly recommended through ExploreTock.com/JaMCellars. See you there! 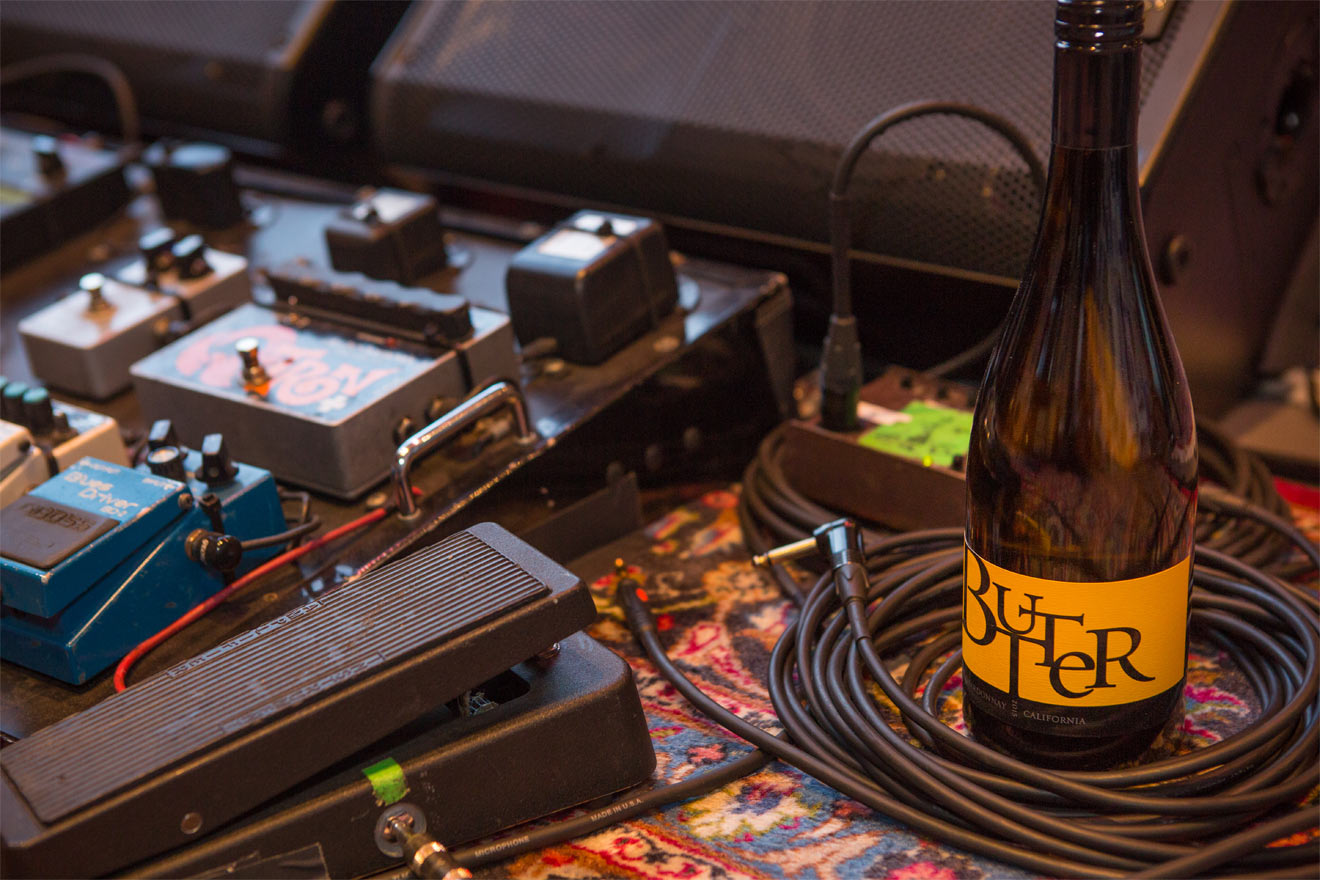 – Things to do in Downtown Napa –