Food, Fun, and Phil: An Evening with Phil Rosenthal Presented by NVFF 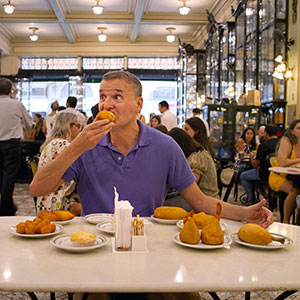 Napa Valley Film Festival presents An Evening with Phil Rosenthal in partnership with The CIA at Copia and sponsored by Cameo Cinema.

Get ready to laugh and salivate as we watch ‘Somebody Feed Phil’ in the Ecolab Theatre at The CIA at Copia. Phil Rosenthal will be our special guest at a screening of his Netflix series and will share stories about how he eats and makes ‘Somebody Feed Phil’ as only he can.

Access to the screening and Q&A are FREE, but a ticket is required for admission due to limited space.

The Napa Valley Film Festival and The CIA at Copia invite you to a post-screening food and wine reception in The CIA’s Teaching Kitchen and Mezzazine. You may purchase an “add-on” ticket for the post-screening reception for $75.

Doors open to the Ecolab Theatre at 5:30pm and the screening will begin at 6pm. The screening and Q&A will conclude at approximately 7:30pm. Reception begins at the conclusion of the Q&A.