Lucy Liu: One Of These Things Is Not Like The Others at Napa Valley Museum 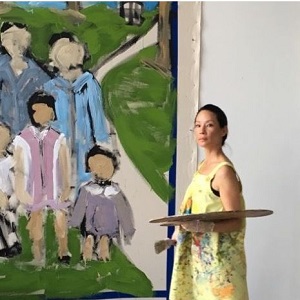 An accomplished artist whose work was recently exhibited at the National Museum of Singapore, Lucy Liu has created an impressive collection of deeply personal artworks, ranging from large-scale paintings to inventive mixed media works to intricate wood sculptures. Lucy Liu is an award-winning actress who has appeared in films, on television and on Broadway. She is also a respected director and dedicated UNICEF ambassador, advocating for children’s health and protection since 2004. Liu will visit Yountville to serve as Keynote Speaker at the Museum’s February 25 “Phenomenal Women” fundraising luncheon, held in the Museum’s main gallery in Yountville, and has generously donated an original work of silkscreen and acrylic on paper: “Freshly Squeezed III, 2013” for auction to benefit the museum’s arts education programs. On exhibition in the Main Gallery from February 1 through April 26, 2020. Opening celebration on February 1st.