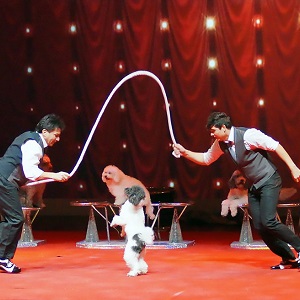 Olate Dogs features acts that include numerous dog tricks such as jumping rope, going down slides and riding scooters. The act also includes a doggy conga line and a talented canine that performs back flips. Up to 10 of their 22 dogs of which 80% are rescues perform during each show. Amy Reiter of the Los Angeles Times called Olate Dogs “the most talented puppies on the planet.”