Who We’re Drinking With: Crosby Roamann

Share with your friends
Submit
In our “Who We’re Drinking With” series we introduce you to some of our favorite people in Wine Country. From winemakers and sommeliers to hoteliers and artists, we’re interested in those who are doing things a bit differently.

Tired of reading the same ol’ questionnaires (do we have to know what everyone wanted to be when they grew up?) we’re throwing curve balls in hopes of finding out some new things about these movers and shakers.

This week we poured one out with Juliana and Sean McBride of Crosby Roamnann in their chic Crusher District tasting room on the south side of Napa. Tired of awkward tasting rooms that have a few “artful” odes to Italy and uninspired staff? We are too. It could have been the polished concrete floors or the tastefully appointed book shelves, but it was probably the record player on constant spin that put us in the perfect mood to ask some questions and taste some wine. 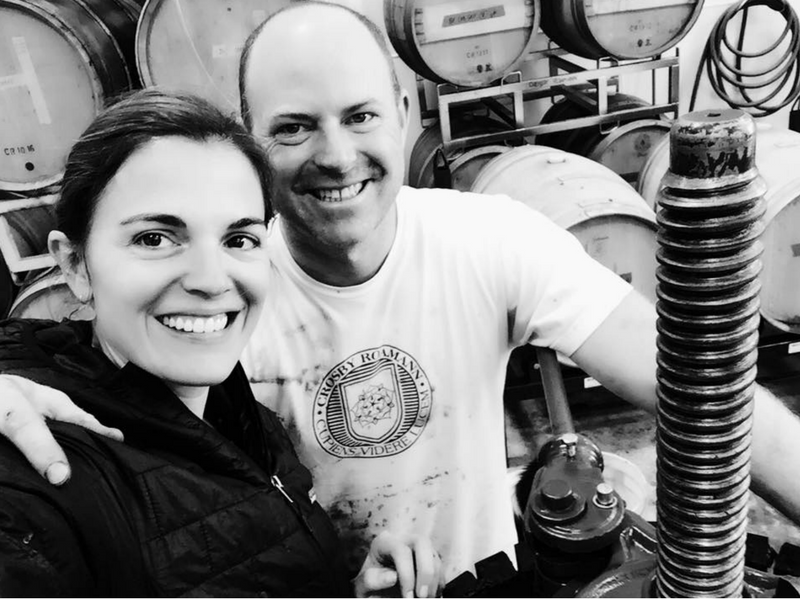 Sean and Juliana began making wine in Tribeca in 2006. Shortly thereafter the wine kicked in and Sean made his way out West. After wine making at White Rock(a breeding ground for young winemakers for over two decades), they started selling their first release in 2010. That’s when, as they say, “left our jobs in Manhattan, sold our apartment in Brooklyn, loaded up the old Volvo station wagon, strapped our baby twin daughters into the back seats, and drove out to California to make a go of it.” The focus of Crosby Roamann’s wines are on single vineyard single appellation, hand-crafted wines. You don’t get much more personal than their approach. They sort their entire harvest by hand, and ferment everything in barrel. The red wines are pressed by hand using an old basket press. They’re the ones you’ll sit down and taste with when you book a tasting. You hear family affair so much in the wine industry it’s almost become trite. But we’re totally digging this family, so much so some of us joined their wine club! 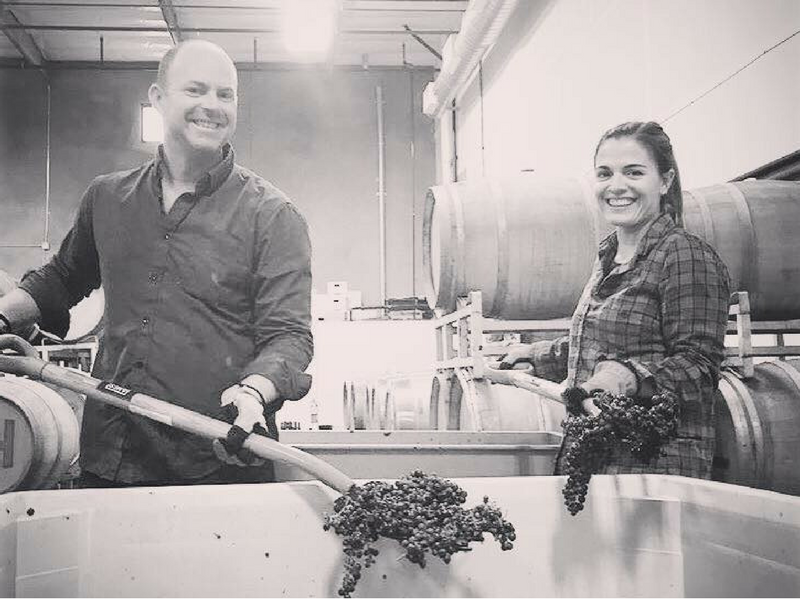 Let’s see what Juliana and Sean have to say in our lighting round of questions:

First thing you thought of when you woke up yesterday?
Juliana: Where am I?
Sean: My wife snores.

Weirdest thing that happened while opening Crosby Roamann?
Juliana: We didn’t know it would be the catalyst for a cross-country, life-changing move.
Sean: The weirdest thing to me is the fact that there is a Crosby Roamann at all. I don’t think that we ever dreamed this would be our life even in our wildest imaginings.

Favorite wine(or beer) related word?
Juliana: Tour de Force, or smooth (with an eye roll). But seriously, someone last week described their favorite wine as smelling like an Italian man.
That, I thought, was pretty amazing.
Sean: Verve. No idea what it really means. Love to say it.

You have to eat a bowl of crickets for $40k, what wine would be the best pairing to help it go down?
Juliana: Nothing would help that bowl of crickets go down. Nothing.
Sean: I don’t know … are they fried? Or are we talking raw?(Editor: No, they’re still chirping.) I’m guessing Chablis.

What is the best thought about Napa Valley you’ve ever heard of? (Quote, saying, conversation)
Juliana: Everybody thinks Napa is old, it’s not the new frontier anymore. But the truth is, there are so many discoveries still yet to make…like us! If you look, you can find some people doing some really cool things, and doing them well whether they’re hip or not.
Sean: Thank you Director of Marketing! For my part, there are two places in Napa that will always be special. The first is the rolling foothills that form northern Carneros. If you take Sonoma Highway on your drive into Napa you’ll know what I mean. It’s a magical place. The second place is north of Saint Helena on the north east side of the Silverado Trail as you approach and then enter the Calistoga AVA. The soils of the Vaca Mountains here have decomposed to a granular, bleached yellow gold, and are infused with all this volcanic rock like obsidian. I simply love the soil here. When I think about Napa, these are the places that I think about.

Favorite thing on your menu right now?
Juliana: 2013 Reserve Blanc
Sean: The 2011 Crosby’s Reserve. An unheralded vintage that produced some exceptional wines. And I’m very excited about the 2016s. They’ll be on the menu shortly.

What’s your favorite ’80s jam and why?
Juliana: “Everybody wants to Rule the World”— Tears for Fears, OR, “Get into the Groove”—Madonna. Takes me back to childhood!
Sean: “Just Like Heaven” – The Kiss (first crush, you know!?) ; and … oh god there’s this song I love and I can never remember the name too. I’m going to have to look it up and get back to you…

If Mike Rowe from Dirty Jobs were to show up what would you have him do?
Juliana: Clean out the hold and haul tank.
Sean: Yes.

What’s the most difficult recipe you’ve ever attempted?
Juliana: Creme brûlée and/or lemon meringue pie (custard is seriously time consuming). Sean is really the chef in our family. I (Juliana) like to make the desserts.
Sean: I have an ongoing problem with fish skin. I love cooking fish but I find the skins really difficult. Take salmon skin. No matter what I do it never really comes out right. It gives me cooking anxiety.

Where is your favorite place to go on a weekday afternoon when you have no plans or obligations?
Juliana: No plans or obligations? Seriously? I have kids. And a dog. So…probably on a hike or Dylan Beach. I daydream about sitting outside at a really cool wine bar in San Francisco or on a rooftop in NYC with a glass of rosé on an impossibly gorgeous day.
Sean: Crissy Field, San Francisco.

Food trend you love? Food trend you hate?
Juliana: Weekly changing menus with the season. Foam.
Sean: I love the farm to table movement. Not a huge fan of eleven course tasting menus.

What is wine for (yours or others) and why:

A broken heart?
Juliana: Chateauneuf-du-pape (red)
Sean: Probably champagne. You know, life’s too short?! Or if it was a really bad break up then maybe a syrah. A really deep and concentrated one.

A job promotion?
Juliana: A special aged white burgundy
Sean: Grower champagne, without question, and a good one at that. Right now I am drinking Aubry Champagne, also I never tire of Vilmart & Cie.

A first date?
Juliana: Two half bottles each of a surprising and refreshing white and a pinot noir.
Sean: Or two full bottles.

A penguin walks through your door right now wearing a sombrero. What does he say and why is he here?
Juliana: Surprise! Happy birthday!
Sean: “My name is Inego Montoya. You killed my father. Prepare to die.”

Fog on the mountains or sun on the vines?
Juliana: Sun
Sean: Sun

Calistoga or St Helena?
Juliana: St. Helena for shopping and restaurants, Calistoga for wine and relaxation
Sean: That’s a good plan. I’ll meet you there.

Cabernet in front of a fire place or rosé pool side?
Juliana: Both sound pretty great.
Sean: Cabernet.

Click here to book a tasting experience at Crosby Roamann. Tasting includes a guided tour of the winery with the winemaker, which often includes tasting from the barrel as well as the bottle, and a small plate of artisanal cheese and charcuterie. Complimentary taxi service can be provided from select Napa Valley hotels and downtown Napa to the winery and back.